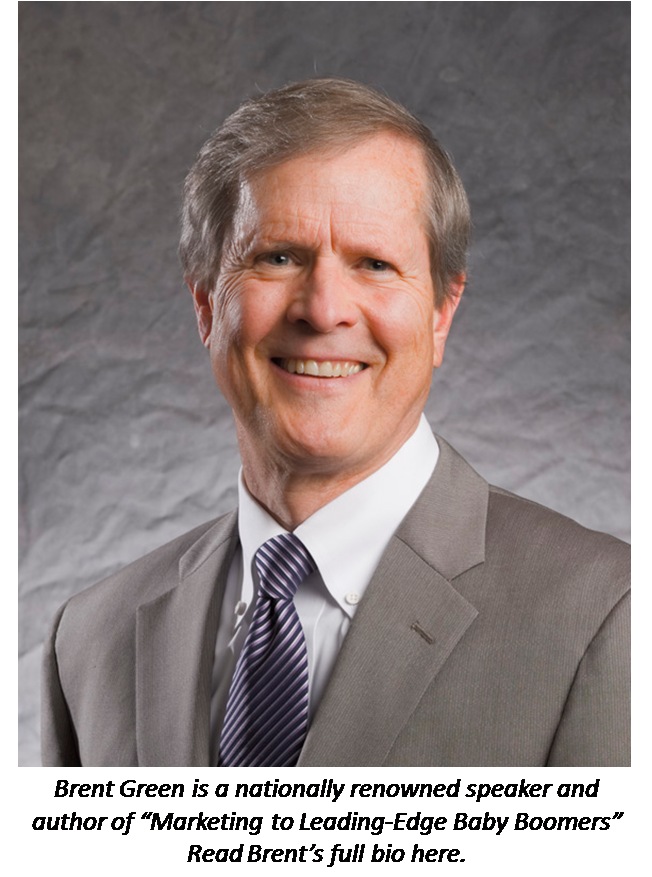 Brent Green on Boomers and the Future of Luxury Brands

While having coffee with one of my colleagues one afternoon, I asked for his views of the future of luxury brands and Baby Boomers. “Luxury brands are dead,” he said, pointedly.

I was taken aback by this cryptic pronouncement. Probing further I asked him to reconsider such a pessimistic position. Entire companies and industries depend on middle- and upper-middle class Baby Boomers pursuing occasional luxury splurges, whether diamond earrings or day-spa packages at a Mobil Five-Star hotel.
He nevertheless remained resolute. An unprecedented economic recession had swept a pall of fear and frugality across the nation, and for this generation, it was here to stay.
In an Adweek article entitled, “Boomers Caught in Squeeze Play,” which assessed Boomer consumerism in difficult economic times, the future does indeed appear bleaker. Eric Almquist, a Bain & Co. partner, observed that a very large group of pre-retirement Boomers are entering a life stage of traditional economic parsimony.
The current Boomer mindset revolves around a nearly universal question: “Can I live off my savings and social security for the rest of my life?” This gnawing question leads to greater risk aversion, obsessive price shopping, and an urge to preserve equilibrium in the current life situation.
Ben Kline with the Leo Burnett agency in Chicago believes that consumers were not just cutting back on spending; they’re reassessing what is important.
Also commenting for Adweek, Kline said, “We’re seeing shift from a trade-up culture to a trade-off culture.” Kline believes that Boomers view discretionary purchases from a newly emerging framework. They are seeking more than value, where a product’s bundle of tangible and intangible attributes reach an optimum balance with price.
According to Kline, consumers are undertaking something akin to brand triage, where they assess discretionary purchases as either indispensable or dispensable, based on more deeply held core values.
David Wolfe, co-author of Ageless Marketing and Firms of Endearment, insists this behavior is being driven by more than distressed economic times. In an email to me and a few colleagues, David wrote:
“The spirit of materialism wells up in youthhood to incline behavior toward outwardly visible messages to others. It takes different forms in different cultures, from body markings and piercings to outlandish clothing and other eye-popping possessions acquired with the intention of increasing one’s influence, power and wealth.”
Wolfe insists that thriftiness in middle-age is not just a byproduct of lifestage; rather, middle-aged adults seek new priorities, driven at the root by fundamentals of human development.
“For most, the onset of midlife is accompanied by an ebbing of narcissism and materialistic appetites because the social and vocational aspirations have typically become trimmed. Now, people begin talking about ‘simplifying’ their lives and putting their lives in balance. All in all these shifts are less rooted in volition than in our genes which anticipate the milestones of personality development. The zeitgeist (reflects) a shift away from narcissistic and materialistic values.”
There you have it. Today’s luxury industries are confronting convergence of two forceful trends: Boomers entering a lifestage when traditional materialistic values become less important, plus a recessionary economy that for many has decimated idealism around retirement.
So I return to the question I asked my colleague, “What is the future for luxury products?”
I believe well-run companies producing products of true quality and uniqueness will not confront inevitable dissolution. Badly run companies will tumble in an unforgiving economy. However, the rules for marketing luxury products must change, and those failing to adapt branding and advertising strategies will suffer grave consequences.
In a recent interview with Women’s Wear Daily concerning the future of discounting, I provided reporter Valerie Seckler with a hopeful analogy using my recent purchase of a luxury white button-down dress shirt at Nordstrom’s.
First, I shopped for a white shirt, as opposed to some other color or stripe, because a difficult economic climate has been influencing men to return to white shirts as an outward statement of prudence and pure business focus. This trend was recently covered by CBS newsmagazine, 60 Minutes.
Second, I knew I could walk across the mall to Macy’s and find white dress shirts on sale for more than half the price of the Nordstrom’s product. But I justified paying double, not because I’m feeling flush but because I know their products and legendary reputation for customer focus.
Third, from experience I know the Nordstrom’s brand shirt will look new and unwrinkled even after 50 washings. When I unpack in a hotel room, the shirt will barely need touch-up with an iron before wearing, and as I wear it all day, it will maintain a crisp appearance. Should the shirt ever show a defect, such as a splitting seam, Nordstrom’s will replace it without hesitation.
This is the future of luxury brands: not just value but core values; not just low prices but product longevity; and not just surface bling but deep customer connection.
Accordingly, here are a few strategies my firm has been recommending to purveyors of luxury products:

Differentiate with values that address emerging Boomer needs to seek higher purpose in lifestyle choices. A watch is more than a watch when acquired as a future heirloom for a grandchild. This understanding has been among implied underpinnings in marketing of luxury watches for Swiss manufacturers such as Breitling.

Make an unassailable quality and durability case. Most Boomers have been burned many times by shoddy products that seemed like a good deal but then break shortly after purchase. Boomers generally believe the adage: You get what you pay for.

Consider tiered pricing. Just as airlines such as Frontier are unveiling tiered ticket prices in coach class, luxury class products can be offered to consumers as good, better and best (not cheap, cheaper, cheapest), without compromising upscale brand stature or differentiation.

Strategic Implications: These are but a few of the strategies my company has been helping clients implement. Many opportunities exist to convert luxury into longevity and superb into sustainability — core values Boomers seek today with their discretionary dollars. And don’t be misled. Boomers still have billions of discretionary dollars to spend yearly, even following one of the deepest recessions since the Great Depression. By far they have greater economic clout than any other generational cohort, so to eschew this market would be economic suicide.