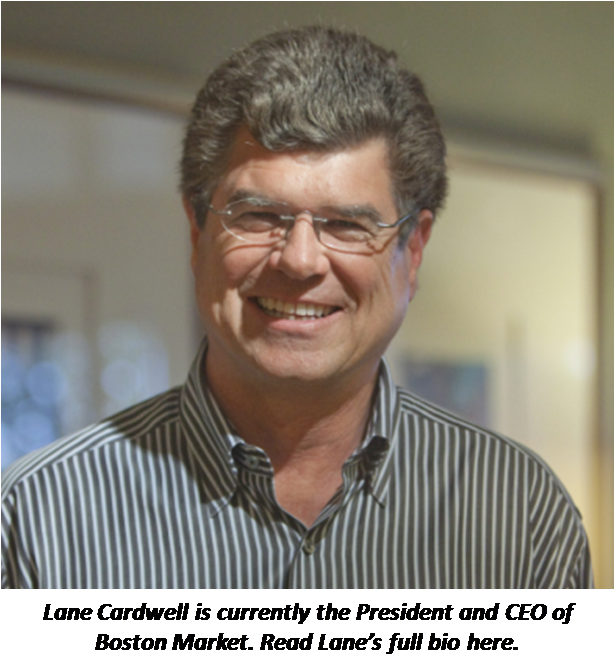 I am honored to be the first guest blogger on Arjun’s blog. I don’t need to know that others were asked before me and turned down the opportunity. I seized the chance to tell my tale of the turnaround of a brand; or least the beginnings of a turnaround. By definition, a turnaround has to end in success, or it is merely a brand that is still in trouble moving in a different direction than it was previously moving.

My turnaround story is about my new place of employment, Boston Market. Boston Market has a storied and colorful history in the restaurant industry. It holds the record of growing faster than any other restaurant chain before it. It grew from 25 stores to almost 1,200 stores in less than six years. It was one of the most talked-about restaurant chains during the early to mid-90s as it rocketed across the country, and onto the tables of American families. It dominated the conversations of competitors, customers and the capital markets.

And then the wheels fell off. The company was required to restate its financial statements to include the losses of its franchise partners. This caused the stock to plummet, and ultimately resulted in the company filing for Chapter 11 bankruptcy protection. Two years later McDonald’s purchased the company out of bankruptcy and owned it for the next seven years. It was originally assumed that they bought it for the real estate, but they saw an opportunity with the brand and tinkered with the rotisserie chicken and hot sides formula. However, they never reinvested in the base business.

In 2007, McDonald’s decided to sell Boston Market to Sun Capital Partners, a private equity firm with almost 80 businesses and several other restaurant concepts. The business they purchased now has approximately 525 locations. I came aboard 4 months ago with marching orders to engineer a turnaround.

Businesses need turnarounds for a variety of reasons. Sometimes they have made a series of missteps that result in the business moving away from its core customers. Other times a business has made no steps, and the marketplace has passed them by. This is what has happened to Boston Market. While it was suffering from the effects of bankruptcy, and then a large owner with bigger fish (or patties) to fry, the world around it changed: fast casual was born.
Fast casual gives the customer the quality of casual dining without the tip, the time, or the price tag. Unfortunately for Boston Market, fast casual operates at a price point similar to its own, but with a better service model. Fast casual typically will bring the food to your table after you have ordered it at the counter and paid.

In addition, grocery stores studied the Boston Market concept intensely and offered their own versions of rotisserie chickens, side dishes, and a host of other items to make a meal from. At their annual conferences, grocery stores even had seminars on how to “Boston Marketize Your Prepared Foods Program.” The world around it had turned hostile.

We are early into our turnaround program at Boston Market. We involved over 100 corporate and field employees, and outside vendors, in an in-depth look at the business and the marketplace around us. We defined for ourselves what success will look like in the future. We have put into motion a series of tests which will tell us if we are on the right path, and if we are, we will roll out these programs across the system.

The odds are against us, but they have been ever since the company embarked on its unprecedented growth program. The company is deep in talent and tenure, and employees at all levels of the organization are pushing the brand upward. The most important part of the early stages of any turnaround is that the people inside the company believe that it can be turned around. From there, everything else is possible.

We will begin with baby steps to rejoin the restaurant world around us, then move quicker and quicker as we pick up momentum, and change becomes part of the culture. Check us out now (we need the business), and then see where we are in a year. I think you will be surprised and delighted at how nimble a 25-year old chain can be when it wants to. And we want to.